I thought it might be a nice idea to spread our musical wings and explore the possibilities of ukulele and violin. It’s not uncommon to encounter an ensemble or duo featuring violin and guitar or mandolin, banjo and guitar, particularly in a bluegrass setting The two instruments work beautifully together and provide a slightly subtler mix than a guitar and violin.

How you interpret the music for this intriguing duo is up to you, but as a suggestion, the violin could play the melody, with the uke providing a rhythmic chordal or fingerstyle accompaniment. Vocals from one or both would augment the arrangements if you don’t want a purely instrumental interpretation.

A note on the Ukulele and Fiddle

Before I move on, one question that often comes up:

‘Is there a difference between a violin and a fiddle?’

No difference at all, except the term fiddle tends to be used more often within folk, bluegrass and country music circles.

I’m delving a little deeper into the subject below and will hopefully answer some of the pertinent questions you may or may not have considered!

Covered in this Article:

What Are Some Good Ukulele Violin Duet Songs?

A selection of great songs from varying musical genres which would suit a ukulele and violin:

Can a Ukulele Be Played Like a Violin? (And Vice Versa)

On the face of it, this seems a fairly unusual question, but if you’re new to stringed instruments in general, it is likely that a number of misconceptions might arise.

In theory, yes, you can play a ukulele like a violin, or play a violin like a ukulele. However, both instruments require very specific playing techniques, which largely preclude crossover between the two under all but the most unusual of circumstances.

You probably can strum a violin in some fashion, but don’t expect it to set the world alight. It’s a bit like using a screwdriver to knock a nail in – it might just about work, but wouldn’t be top of the list for effectiveness.

Reversing the question, could you bow a ukulele? Again this one should probably be filed away in the ‘don’t waste your time’ section. It’s just about feasible on an electric uke with metal strings, but would still be a bit gimmicky. Jimmy Page of Led Zeppelin has effectively dabbled in bowing his guitar, so you probably shouldn’t rule this one out, especially if you’re of an innovative disposition!

Violins and ukuleles are similar in terms of size and the number of strings, along with very little difference in weight – although this can be variable, depending on the construction woods used and the basic design of a particular model. You’d think, therefore, it’d be quite easy to play a uke like a violin, or vice versa. But it’s not that simple.

To understand where the majority of differences lie, you have to delve a little deeper into the basic architecture of both instruments. Starting with the bridge of a violin. This is referred to as a floating bridge, meaning that it isn’t physically attached to the body of the instrument, but rather, it’s held in place by the tension of the strings.

This also applies to some styles of guitar and other fretted and bowed instruments. Ukuleles, on the other hand, by and large feature a fixed bridge and saddle arrangement. These will be glued onto the top or soundboard of the uke at a specified distance from the nut, allowing for reasonably accurate intonation along the distance of the fretboard.

A floating bridge alone will have very little impact on how an instrument can be played, but what sets the two apart from each other, is the violin and other members of the bowed family (violin, viola, cello, double bass and the forerunner, the viol) feature an arched bridge, allowing each string to sit a little higher or lower than it’s neighbor.

This is done for a logical reason when you understand how a violin is played. The majority of violin music calls for single strings to be bowed one at a time, rather than together like a ukulele or guitar which can play chords.

Saying that, the violin, viola etc. are able to bow two strings at once, but in strict harmonic terminology, a chord will feature three or more notes played simultaneously.

This isn’t possible on a violin, because the hairs on the bow can only touch two strings at a time, because of the staggered arched design. Strumming a violin is a viable option (see the clip below), but may be something of an acquired taste!

The fingerboard on the violin is also cambered to correspond with the arched bridge. This feature is sometimes seen on the occasional ukulele or guitar, but is less pronounced, or chordal playing would be impossible.

The other major design difference is the absence of frets on the violin. This allows for more flexible intonation capabilities, but will also make the violin a little harder to master in the early stages. To achieve slight differences in intontation on a ukulele, you have to bend the string to vary the frequency of the note.

This is why it’s a lot more practical for bowed instruments to venture into other non-western genres of music, which call for microtonality (the subtle notes inbetween the standard twelve chromatic notes on a western scale). You do get the odd fretless guitar or even ukulele, but these are generally luthier-built specialist instruments, created for a very specific purpose.

The only mainstream fretless instrument produced by the leading music companies is the fretless bass, even though these are manufactured in much smaller numbers than a regular fretted electric bass guitar.

Both instruments also have soundholes, but these are quite different from each other in accordance with the sound they need to produce. A traditional ukulele generally features a largish circular soundhole in the center of the body, whereas a violin has two ‘f’ holes on either side of the body of the instrument. Both are designed to maximize the inherent resonant properties associated with the music they’re likely to play.

Ukulele design has gone quite wild in recent years, so it’s not unusual to find the soundhole in unexpected places on some instruments – on the side is a popular variation for a minority of players. Some even feature violin-style ‘f’ holes, much like some archtop jazz guitars. By and large, though, the two main styles tend to be the norm on the uke and violin.

Veering away from regular violin design, you do occasionally see fretted versions creeping onto the market (albeit produced by independent violin luthiers). This is generally a diversification brought about by people more familiar with the mandolin, who wish to transfer their already acquired knowledge onto the violin, without going through a significant learning curve, as both instruments share the same tuning.

Another unusual innovation in violin design is the inclusion of a non-arched bridge. This allows chords to be played, as well as single notes on the first and fourth strings. Chords are possible on a regular violin, but only when it’s played pizzicato, when the strings are plucked with the fingers.

The similarities of tuning a uke and violin begin and end with the fourth string, which are both tuned to an open ‘G’ note.

Most ukuleles are tuned with a re-entrant ‘G’ (higher pitched than the 3rd string), although a regular low ‘G’ is becoming increasingly popular with a number of well known players. The violin tends to stick rigidly to it’s standard tuning, except in some folk music circles.

Note: You can tune a regular ukulele like a mandolin, but it’s very much a specialist tuning used by a few players, including Ben Rouse of The Ukulele Orchestra of Great Britain. You also have to be quite selective with your string purchases or they’re likely to break. Not a road to go down for anybody just beginning their ukulele journey.

Which is Easier: The Ukulele or the Violin?

If I was asked specifically which instrument is suitable for a complete musical novice, I would probably say that the ukulele is easier to learn and play, rather than the more challenging violin.

This is for a number of reasons which I’ll lay out below: 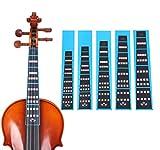 
To redress the balance a little, I should point out the violin is a fantastic instrument if you’re prepared to put in a reasonable amount of practice to get beyond the tricky initial learning period.

But – and it’s a significant but – you’re unlikely to progress on your own without the help of a violin teacher to guide you through the basics.

Putting aside the comparative difficulty of the violin, there are few instruments as expressive and beautiful in many different genres of music, including: classical, folk, bluegrass, jazz, and even rock.

If you want to further explore the ‘Fiddle Fretter’, they can be ordered from the following address:

If you already play the ukulele or violin, the transition should be a lot easier than anybody coming to a stringed instrument as a complete novice. I would say that a violinist would probably find the transition a little easier than the other way around, but it’s still a different discipline to get to grips with.

In conclusion, whether you’re considering taking up one of the two instruments or rather fancy the idea of starting up a duo with a fellow musician from ‘the other camp’, both the ukulele and violin have many wonderful attributes, alone or together. It’s also very effective within a trio, including: violin, ukulele and guitar.

Tobe A. Richards is a musician and author of 40+ books on musical chord theory for fretted instruments. He started Fret Expert to share his knowledge about all things fretted, and as a way to help others from 40 years' experience in music, composition, harmony, and chord theory.

link to How Hard or Easy is it to Learn to Play the Ukulele?

Everybody will have a different experience when it comes to learning a new skill set. However, here I'll discuss aspects of learning that many new players have already gone through or are likely...

Trying to compare a ukulele with a piano is the question is somewhat akin to "what’s your favourite colour"! It’s what appeals to you most and how applicable either instrument is to your...

I'm Tobe A. Richards, musician and author of 40+ books on musical chord theory for fretted instruments. I started Fret Expert to share my knowledge about all things fretted, and as a way to help others from my 40 years' experience in music, composition, harmony and chord theory. My wife is very understanding of having to share our living space with a myriad of different fretted instruments!

Fret Expert is a participant in the Amazon Services LLC Associates Program, an affiliate advertising program designed to provide a means for sites to earn advertising fees by advertising and linking to Amazon.com. We are compensated for referring traffic and business to Amazon and other companies linked to on this site.